Plans for a parkway station for Leeds Bradford Airport have moved a step closer.

In June, Leeds City Council’s executive board gave approval to the outline schedule for a scheme to build a parkway station on the Leeds-Harrogate railway line. This gave the go-ahead for a feasibility design to be carried out for the parkway station, which is one of several schemes in the Leeds Public Transport Investment Programme.

The Department for Transport (DfT) gave support for funding of the project, along with the other major transport schemes, in the spring.

The parkway concept includes plans for a train station to be added to the Harrogate-Leeds railway line. A short shuttle would then be provided for passengers travelling to and from LBA. In addition, the plans also include a park-and-ride scheme for people travelling into Leeds or Harrogate.

Charles Johnson, Head of Planning Development at LBA, said: “We are working closely with all parties to progress the parkway station as quickly as possible and we fully support the proposal. This is a really important initiative and one that will improve connectivity across the region, as well as help people travelling to and from the airport.”

A Deliver Partner is to be appointed by the West Yorkshire Combined Authority to commence on timetabling and modelling work. Funding for all of the transport schemes needs to be committed by the end of 2021. 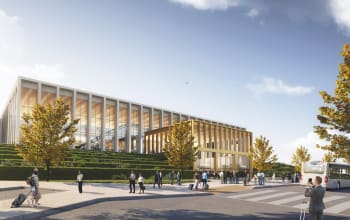